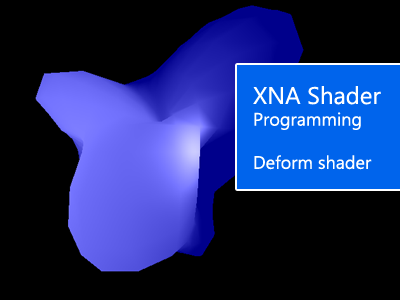 Welcome back to the XNA Shader Programming series. Since the start of tutorial 1, we have been looking at different lighting algorithms. Todays tutorial will be quite short and different, compared to those others, a pure vertex shader effect for deforming objects.

Before we start
In this tutorial, you will need some basic knowledge of shader programming, a understanding of geometry, vector math and matrix math.

To do this, we need a vertex shader that simply moves a vertex along it’s normal:

If we move all the vertices along their normals, the object will be bigger, or smaller.

Ocean waves
Instead of making a big bone animated mesh to create a realistic looking ocean in your game, you could use a vertex shader to produce waves.
To do this, you will need a big flat mesh that will represent your ocean without any waves. You could either do this in 3Ds, or produce it with code. It will need many vertexes, as the shader will move them up and down according to a sine/cos function.

As we can see in this picture, we got a plane defined by a lot of vertices. We can use a Vertex Shader to move all vertexes by its Y-axis with a sine function, say

This will produce waves on the ocean. Of course, this is really simple and pretty ugly. There is a lot of different Ocean algorithms out there, so if you want to look more closely on this subject, just do a bing the topic.

To make the ocean look better, you could apply a normal map to create small bumps on the surface, in addition to huge waves. You can also mix sine and cos functions to make more realistic waves.

This is what I’m going to implement today. Its pretty much a combination of the slim/fat algorithm and the ocean algorithm. The example will use a sphere object, and apply a pretty advanced sin/cos function to move vertexes along their normal in order to deform it, based on time.

The shader is just a Vertex Shader. The pixel shader will only do some basic lighting to make it look more real. You can add normal-mapping here and so on to create really cool looking effects( refer to my previous tutorial on normal mapping ).

In this shader, we will need a time variable, so we can move our vertexes along with a timer to make it look animated, and then we only make a huge mess of sine and cos functions to make it look cool. Feel free to play with these values.

We will use the same shader as in Tutorial #3.

First of all, we must add a timer to the shader so we can create an animation.

Then the rest of the effect is happening in the Vertex Shader only, and only the position variable of the vertex is changed.

Here is the Vertex Shader for this effect:

It’s all about modifying the position of the vertex, moving them along their normal to shrink/expand the model. Doing this with a sin/cos function, we can create some pretty cool objects. If you for example modify the timer-value with the input from the keyboard or gamepad – you can search for some pretty cool objects, save the parameter and use them as enemies or anything you’d like.

This entry was posted in Tutorial, XNA Shader Tutorial. Bookmark the permalink.