1. Introduction
The amount of quality apps and games on both Windows and Windows Phone is rapidly increasing, and the similarity between the platforms when it comes to development is marginal. Creating a Windows 8.1 app or game, and then porting it to Windows Phone 8.1 is usually a small task.

2. What is Universal apps
Universal app is a project type that enables you to create an app once that shares code, and generates an app packaged for both Windows Store and Windows Phone Store – as a result from the Windows platform convergence movement. This doesn’t mean that there is a magic button that just creates a package for the other platform – since you still need to account for the different form factors, handle certain launchers that only makes sense on a mobile device and so on.

But we are at a level where most of the function calls of the SDKs are similar, they share the revenue model, installs across devices, shares the in-app purchases, got the same pricing structure, will get linked in the store. If you buy the app on a Windows Phone, it will also be available on the Windows Store. 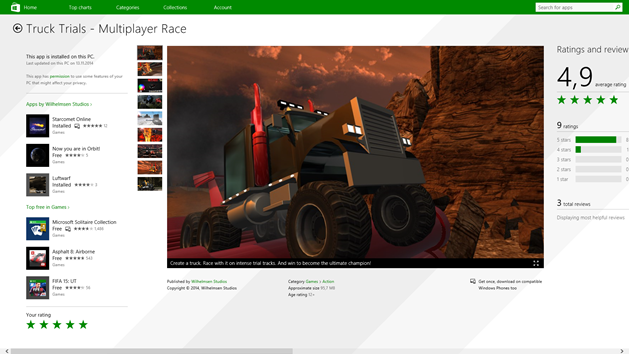 As you can see in the screenshot above, there is a small text below the game pictures, on the right side:

Unity3d (www.unity3d.com) exports Universal Apps for FREE (no need to have a PRO license) – as I did with my game Truck Trials. And in this tutorials, I will show you the steps required to export and find the packages.

You can read more about Universal Apps here:
http://dev.windows.com/en-us/develop/Building-universal-Windows-apps

3. Exporting
Using Unity3d, exporting is very simple. In your unity game project, go to the export

You can then build and generate the app packages from the Visual Studio solution. One will be fore Windows Phone 8.1 (ARM), and another for Windows 8.1 (ARM and x86).

Follow these great guides for a step-by-step guide to publish your app.

This entry was posted in Tutorial, Windows 8, Windows Phone. Bookmark the permalink.