This functions takes the gameTime variable, and adds the elapsed game time in milliseconds * spriteDirection to the X direction of our spritePosition. spriteDirection used to change the direction the character moves. If the characters is on the right side, we multiply the direction with -1, making the value spritePosition.X is added with, negative. This will make it move to the left side of the screen instead. If the character is on the left side of the screen, we multiply the negative value by -1 again, making it positive.
This will make the character move back and forth between X=50 and X=400.

Next, we will have to call the MoveCharacter(..) function we just created from the games Update() loop.
MoveCharacter(gameTime); 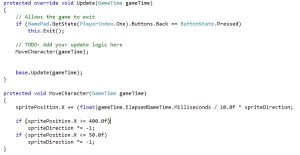 Now, hit F5 to build, compile and deploy your game to the emulator and see it all in action!

And that ends this tutorial. It was very simple, but it sure creates some movements to our game!

This entry was posted in Windows Phone. Bookmark the permalink.