The Microsoft Build Conference just took place in Seattle, and I will be creating a couple of blog posts regarding content from Build 2019, but first, I’d like to share this little demo that was presented.

In this demo, the Apollo Saturn V and the Lunar Module is beautifully rendered with an amazing set of details, and interacted with through the HoloLens, digitally recreating the historic lunar landing.

Unreal Engine is about to get native support for HoloLens 2 development by the end of this month:
Creative communities across entertainment, visualization, design, manufacturing, and education eagerly anticipate Unreal Engine 4 native support for HoloLens 2, which Epic has confirmed will be released by the end of May. Originally intended as a stage demo for Microsoft Build, the Unreal Engine team unveiled a remarkable interactive visualization of the Apollo 11 lunar landing, which celebrates its 50th anniversary this year. This is a recording of a live rehearsal taking place on May 5, 2019.

Mixed Reality and Unreal
In the short session below, Ryan Vance from Epic Games and Jackson Fields from Microsoft Mixed Reality talks more about the Unreal Engine support for HoloLens 2 and Windows Mixed Reality headsets. The sessions also goes more into details about the demo itself, and how things were set up. 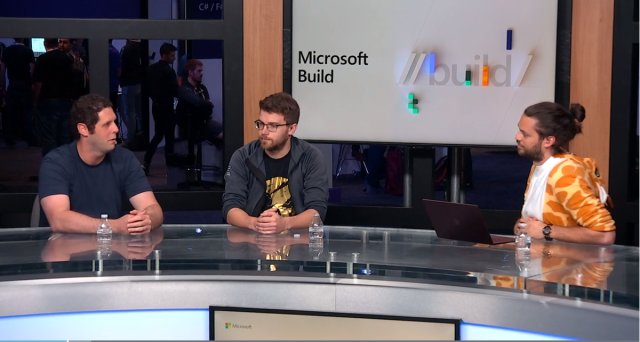 If you wish to dive deeper into the tech itself, and how to get started making Mixed Reality apps using UE, this session will walk you through everything you need.

Reentry – An Orbital Simulator
The demo presented at Microsoft Build 2019 shows the Apollo rocket from an external perspective, and recreates some if its important stages. I have been working on another project, where I use a game engine to create a simulator, much like Flight Simulator, where you fly and operate these spacecrafts using similar procedures and checklists that was used by the astronauts.
You can read more about this project at http://reentrygame.com/.